There are many myths and misconceptions surrounding endometriosis.  Many women are given mis-guided information which unfortunately comes from various sources.  It is estimated around 10% of pre-menopausal women suffer from endometriosis, yet so few people have heard of it. 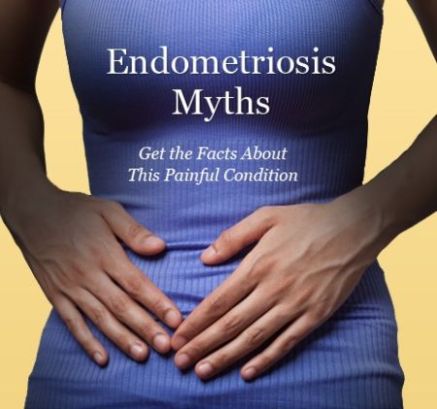 The myths about this disease are still pervasive, despite the growing realisation that it’s one of the most common chronic illnesses among women. These myths are largely responsible for the fact that many women with the disease suffer for years before being correctly diagnosed, let alone effectively treated.

Awareness about this disease needs to be spread so that the mis-conceptions are improved.  This will reduce the number of years it takes for women to be diagnosed with endometriosis and will reduce the amount of damage it causes by being left untreated.

Your pain is normal.

Severe menstrual pain is not normal and needs to be investigated.  There is a constant mis-understanding that it is normal to have bad period pains.  In the past it was expected 'to have problems during that time of the month'.  Fortunately attitudes are gradually changing.

Endometriosis can cause really severe pain not only during menstruation, but can cause pain throughout the month.  This is why your symptoms need to be checked out.

Endometriosis only affects the uterus

The growth of endometriosis often starts in the uterus or the ovaries, but very often the disease spreads to other areas to include other organs in the pelvic cavity.  It can also invade the tissue of the bowel causing many distressing symptoms.  Endometriosis has also been found in the lungs, urinary tract and even in the skin.  Read the full list of symptoms HERE

This simply is not true because the disease can spread to other areas of the body.  So removing the reproductive organs can often leave deposits of the disease in other areas, especially around the pelvic cavity.  Read women's experience of hysterectomy including accounts of endometriosis returning after surgery HERE 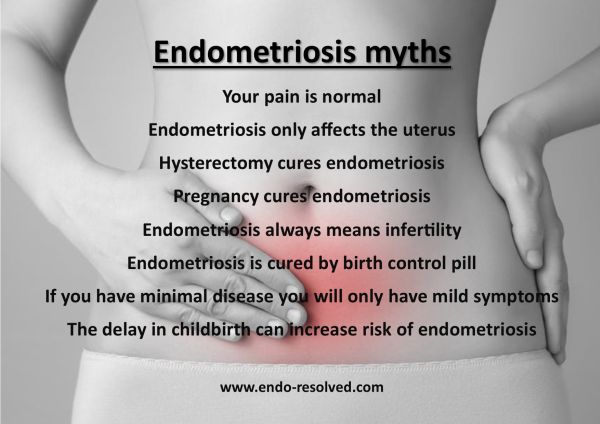 This is also completely untrue.  There are many women who have had successful pregnancies despite suffering endometriosis.   It is believed that around 60% to 70% of women with endometriosis are fertile and can conceive.

However, in general, it is believed that the likelihood of fertility problems increases with the severity of the disease and, as in women without endometriosis, the problem increases with age. Fortunately there are many success stories of women achieving happy full term pregnancies which you can read about  HERE

Birth control pills and other hormonal medications are often prescribed as a treatment for the painful symptoms of endometriosis. However, hormone treatment is not a cure.

What drug treatment does is put the disease on hold, and the birth control is taken continuously to mimic the state of pregnancy in the body.  This helps to reduce the further development of the disease, but as soon as drug treatment is stopped then the disease will return with full force.

If you have minimal disease you will only have mild symptoms

There is no correlation between the severity of symptoms and how far the disease has progressed.  Some women have very severe endometriosis (as diagnosed by a laparoscopy) but may only have mild symptoms.  On the other hand there are some who have mild endometriosis and yet their symptoms are severe with very bad pain and severely painful periods.

The delay in childbirth can increase the risk of endometriosis

This myth has been borne out of the idea that this disease is the career woman's disease - because she has delayed childbirth this has been the cause of developing the disease.  There is  some evidence to suggest the more children you have the less risk of developing endometriosis you have. However, this is probably due to the suppressive (not curative) effect pregnancy can have on endometriosis.