Many women suffer with a range of upsetting symptoms of the bowel caused by endometriosis.

However, too many doctors still do not think of endometriosis when their patients report symptoms such as intermittent constipation or diarrhoea, or alternating bouts of the two or bleeding from the rectum.

Most importantly, they do not think to ask woman if their bowel symptoms vary with their menstrual cycle – the key feature of bowel involvement due to endometriosis. As a result, some young women are not being diagnosed.

Most bowel symptoms are not due to the presence of endometriosis on the surface of the bowel itself. Rather, they are usually due to irritation from implants and nodules located in adjacent areas, such as the Pouch of Douglas, uterosacral ligaments, and recto-vaginal septum.

In those cases where the endometrial implants are located on the bowel, the implants are usually lying on the outside surface of  the rectum rather than in the bowel itself. Nevertheless, endometriosis can penetrate into and through the bowel wall on some occasions.

The large bowel is a much more common site of endometriosis than the small bowel. Some symptoms are due to adhesions constricting, twisting, or pulling on the bowel.

Diagnosis relies a great deal on the woman's description of her symptoms and menstrual history. Bowel symptoms due to endometriosis are generally only present or are worse around the time of the period, though they may be present throughout the month for some sufferers.

They are also usually reported along with one or more of the classical symptoms of endometriosis, such as painful periods and painful intercourse, rather than on their own.

Sometimes the gynaecologist will refer the woman to a Gastro-Intestinal specialist if he or she is not sure whether the bowel symptoms are due to endometriosis or another cause. Occasionally, the gynaecologist may refer the woman to a specialist for a colonoscopy.  A colonoscopy is an examination of the inside of the gastro-intestinal tract with a telescope-like instrument.

In most women with endometriosis, the colonoscopy will be normal because endometrial implants and nodules rarely penetrate through the wall of the bowel wall so they are not visible during a colonoscopy. 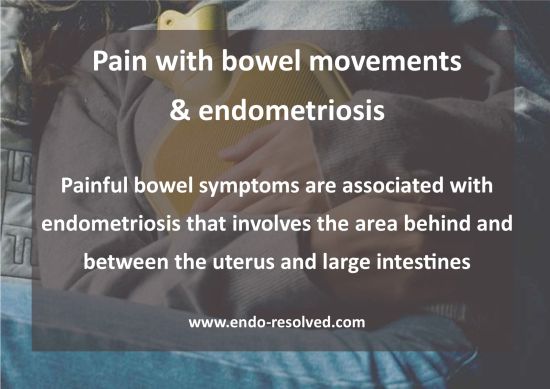 Endometrial nodules in the Pouch of Douglas, uterosacral ligaments, and recto-vaginal septum are generally larger and deeper than ordinary implants. They do not usually respond to drug treatment so they will usually be removed surgically.

Because they are difficult to reach, there is a danger that the bowel may be damaged accidentally during surgery. Therefore, the surgeon must be experienced at laparoscopic surgery.

Cutting (excision) techniques are usually used rather than burning techniques. Superficial endometrial implants on the surface of the bowel are usually removed by carefully removing the relevant part of the membrane that covers the bowel wall.