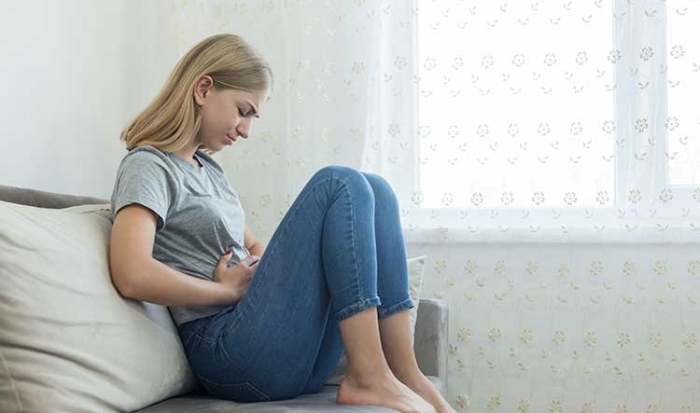 Irritable bowel syndrome (IBS) is a term used to describe discomfort in the bowel and the abdomen. The symptoms vary from one person to another. The usual symptoms may include cramping pains in the abdomen, bloating of the abdomen, lots of gas, mucus in the stool, and changes in bowel habits.

This is a digestive problem that seems to be common for women with endometriosis. Many people who suffer from Irritable Bowel Syndrome say they can pin-point the beginning of their digestive problem to a stressful period in their lives.

Very often IBS is confused with inflammatory bowel disease or ulcerative colitis. But IBS is not a disease and does not cause inflammation, bleeding, damage to the bowel, or cancer or other serious diseases. It is known as a functional disorder, which means that there is no visible sign of disease when the colon is examined, but the bowel doesn't work as it should.

For most people IBS is just a mild annoyance, but for some people it can be disabling and totally upsets their life. They may be unable to go to social events, to go out to a job, or to travel even short distances. Most people with IBS, however, are able to control their symptoms through diet, stress management, and medicines.

Symptoms of IBS may include:

The muscles of the colon contract (tighten or squeeze) and gradually move the material toward the rectum. Strong contractions then lead to a bowel movement. Colon contractions are controlled by nerves, hormones, and by electrical activity in the muscles.

Researchers have found that, for unknown reasons, the colons of people with IBS seem to be more sensitive, and react to things that would not bother other people. An example is the muscles may contract too much after eating. These contractions can cause cramping and diarrhoea during or shortly after a meal.

The nerves of the gut can be over sensitive to the stretching of the bowel (caused by gas, for example), causing cramping or pain. Diet and stress play a role in IBS for many people, causing symptoms or making them worse. In women, IBS symptoms may be worse during their menstrual periods, so it appears hormone changes may be involved. It is common for IBS symptoms to appear after another illness.

How do diet and stress affect Irritable Bowel Syndrome?

In people with IBS, stress and diet often seem to cause symptoms. Many people report that their symptoms occur soon after a meal or when they are under stress. No one is sure why this happens, but scientists have some clues.

Digestion causes contractions of the colon. Normally, this response may cause an urge to have a bowel movement within 30 to 60 minutes after a meal. In people with IBS, the urge may come sooner with cramps and diarrhoea.

When suffering IBS the contractions may be stronger after a large meal or a meal with a lot of fat in it. People with IBS learn which foods to avoid that seem to make their symptoms worse.

Stress very often causes contractions of the colon in people with IBS. The reasons for this are not clear but we are aware of the sensations we feel 'in the gut' in response to certain emotions.

Scientists have noted that the colon is controlled partly by the nervous system. Learning relaxation methods and other ways to reduce stress can be helpful.

What foods may cause Irritable Bowel Syndrome symptoms?

Some foods that may cause symptoms include:

It is advised to keep a journal to keep track of the foods that seem to be the triggers for your attack. If certain foods cause your symptoms to flare up, you can try eating less of those foods. Consulting a registered dietitian can help you make changes in your diet.

Other things that will help

Your gut flora may be upset, and you have too many bad bacteria in your gut. A bad bacteria overload can be triggered by stress, bad diet, anti-biotics. Take a good quality pro-biotic to rebalance the gut flora.

Regular exercise can help with constipation and improve your health in other ways. Look into stress reduction methods or counselling if you think they might be helpful.

Be careful about using laxatives of anti-diarrhoea medicines to treat yourself. They can cause more problems for your gut health in the long run.