What is a cyst?

A cyst is a spherical area in any organ in which an outer wall encloses a type of tissue or fluid of a different consistency than the normal tissue. In most cases, the cyst wall encloses a softer or more liquid tissue.

Ovarian cysts are a very common symptom of endometriosis. Within the ovary there are over a dozen different types of cysts that can occur. 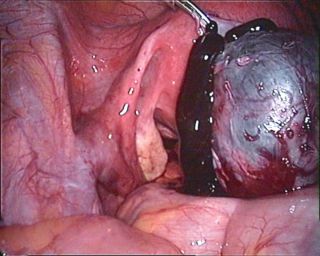 Chocolate cyst on the ovary presented during laparoscopic surgery

How do cysts develop?

About 60% of women with endometriosis develop cysts in the ovaries which vary from microscopic spots to a growth the size of a tennis ball.  Some women have even reported cysts as large as a grapefruit.

When they are small, the endometriosis growths look a bit like blood blisters and are reddish-blue, or brown if the blood old.  Both ovaries are usually involved.

The ovary usually tries to contain a capsule around the growth and a cyst is formed. These cysts are either called endometriomas, ‘chocolate cysts’ or endometrial cysts, and are filled by endometrial blood shed at each period.

Even when small these cysts can rupture and spill their contents within the pelvic cavity.  Unruptured cysts keep growing within the thickened capsule.

The endometrial tissue inside still responds to hormonal changes in the same way as the normal endometrium and bleeds with each period, causing the cysts to get bigger every month.  Eventually the blood becomes thick, sticky and dark brown.

Very occasionally cysts will wither away because the internal pressure deprives the cyst of blood supply and it atrophies.  Former atrophied cysts can be identified by the little white scar they leave on the ovarian tissue.

Alternatively, the cyst may grow painlessly, but the risk of rupture increases as the months go by.  When really large cysts rupture, they cause symptoms of acute abdominal pain and shock which needs to be treated with surgery.

Even a very small amount of blood shed during this kind of rupture will cause inflammation and pain.  These common, smaller cyst ruptures usually happen during or just after a period, and are a prime suspect in causing endometriosis pain.

FUNCTIONAL CYSTS – are the result of normal processes within the ovary and are self-limiting and at the end of each menstrual cycle they are completely resolved.

SIMPLE CYSTS – These cysts may be functional or not.  When seen on ultrasound, they have a single compartment.

COMPLEX CYSTS – These cysts have more than one compartment with them and are less likely to be functional.

HEMORRHAGIC CYSTS – This term refers to any cyst felt to have blood or clots within it.

DERMOID CYSTS – These cysts are a type of non-functional, benign cysts. There cysts may have hair, teeth, and fat in them.  They are formed in the embryo an should be removed but are rarely harmful.

ENDOMETRIOMAS – These cysts are caused by endometriosis in the ovary or other tissues.  As these cysts progress they frequently produce a thick dark material and have been given the name ‘chocolate cyst’.

How Are Ovarian Cysts Treated?

Your surgeon will can use several approaches to treating an ovarian cyst:

Aspiration - A cyst may be treated by simply draining the fluid out. This technique does not remove the cyst wall and frequently allows the cyst to reform over a period of time.

Aspiration plus cyst wall ablation – this involves draining the cyst and then using different forms of energy like electric current or laser to destroy the cyst wall.

Excision - This treatment option involves totally removing the entire cyst wall by cutting it out of the ovary.

Oophorectomy - Removal of the ovary is rarely required to remove a benign cyst. It is  the recommended form of treatment for all malignant cysts.

Severe endometriosis surgery - stage 4 endo – not for the squeamish