There are many health benefits to be gained by consuming Green Tea. There is one health benefit in particular which is  appropriate for women with endometriosis, and that is the ability of Green Tea to protect the body at a molecular level from the toxic effects of Dioxins. 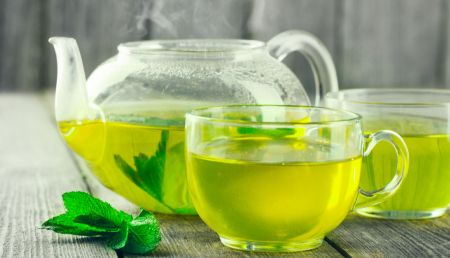 The fact that researchers have discovered that Green Tea can protect the body from the damaging effects of dioxins is valuable advice for women with endometriosis, given that many researchers feel that dioxins could be one of the causes of endometriosis.

A study by researchers at Rochester University suggesting that green tea’s ability to fight cancer is even more potent and varied than scientists had initially known about. The researchers found chemicals in green tea that shut down a key molecule that can play a role in the development of cancer.

There are numerous chemical contaminants which enter the body and cause their damaging effects through the molecular pathway. This same pathway is shut down by the active ingredients in Green Tea. These chemicals include dioxins, some PCBs, and various other nasty chemicals.

Green tea can has the potential to:

The use of adequate amounts of green tea can:

Green tea provides powerful antioxidant polyphenols (estimated as 25X the antioxidant activity of vitamin E and 100X that of vitamin C). It promotes growth of friendly intestinal bacteria and decreases toxic bowel metabolites. Finally, another key benefit is the ability to greatly boost the immune system.

It is well known that caffeine aggravates the symptoms of endometriosis, but fortunately you can purchase decaffeinated Green Tea. An average cup (6 oz) of green tea contains approximately 30 milligrams of caffeine.

Some Green Tea brands use the chemical, ethyl acetate, which  can destroy most of the best antioxidants found in green tea. A double negative of more unwanted chemicals plus the health benefits of the tea being removed. Therefore if you want to give Green Tea a try then purchase naturally decaffeinated organic Green Tea, which will not upset or aggravate your symptoms of endometriosis.

My name is Carolyn Levett, the Founder of endo-resolved - I am an  Integrative Health Coach having studied nutrition, naturopathy, aromatherapy  as well as being a published author. I used to suffer from severe endometriosis and was able to regained my health and heal from the disease with the support of nutrition and natural therapies.