A word about soy and endometriosis

Once upon a time there were many sources of advice  that used to say soy proteins and soy based foods were totally safe and good for you, to replace meat and protein in your diet.

But the advice can sometimes be biased and not clear cut. Reading this article will hopefully help to 'clear the mist'. 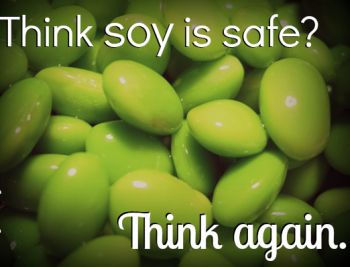 In recent years soy has been promoted as the perfect food, with supporters claiming it can provide an ideal source of protein.

It has also been promoted for its many health benefits including lower cholesterol, protect against cancer and heart disease, reduce menopause symptoms, and prevent osteoporosis, among other things.

Two isoflavones found in soy, genistein and daidzen, the same two promoted by the industry for everything from menopause relief to cancer protection, were said to ‘demonstrate toxicity in estrogen sensitive tissues and in the thyroid’. That last sentence is rather important for women with endometriosis.


There are two ‘camps’ for the use of soy in food. There is the traditional, oriental use of soy in fermented soy products. These products are produced naturally and do not contain the same chemicals and toxins of the modern highly processed use of soy.


The modern approach to the use of soy has come by default, by finding a use of the soy bean by-products after the extraction of oil from the bean. There was so much soy bean residue that extensive multi- million dollar campaigning and advertising was used to promote this new ‘wonder-protein’.


Production of modern soy protein products takes place in industrial factories where a slurry of soy beans is first mixed with an alkaline solution to remove fibre, then precipitated and separated using an acid wash and, finally, neutralised in an alkaline solution.


Acid washing in aluminium tanks leaches high levels of aluminium into the final product. The resulting curds are spray-dried at high temperatures to produce a high-protein powder. A final negative process to the soybean is high-temperature, high-pressure extrusion processing of soy protein isolate to produce textured vegetable protein (TVP).


But high-temperature processing has the unfortunate side-effect of so denaturing the other proteins in soy that they are rendered largely ineffective. Nitrites, which are potent carcinogens, are formed during spray- drying, and a toxin called lysinoalanine is formed during alkaline processing. Numerous artificial flavourings, particularly MSG, are added to soy protein isolate and textured vegetable protein products to mask their strong "beany" taste and to impart the flavour of meat.


After multi-million dollar figures spent on advertising and intense lobbying to the Food and Drug Administration (FDA), about 74 percent of U.S. consumers now believe soy products are healthy.

Here is a quote about soy from the book "What Your Doctor May Not Tell You About Premenopause" by Dr. John Lee, one of the pioneers in the use of Natural Progesterone Cream.

"Please be wary of all the hype around soy. Although it does contain compounds that can help balance your hormones, it is far from a magic hormone balance solution. Soy contains compounds that block the absorption of needed nutrients like zinc and will disable enzymes your body needs to access other nutrients. It directly blocks thyroid function and protein absorption. Many people are allergic to soy products, and women who are extremely sensitive to estrogens of any kind may react negatively to them.

This is a list of health hazards of soy as reported by health and diet specialists:

3. Soy phytoestrogens disrupt endocrine function and have the potential to cause infertility and to promote breast cancer in adult women.

4. Soy phytoestrogens are potent antithyroid agents that cause hypothyroidism and may cause thyroid cancer. In infants, consumption of soy formula has been linked to autoimmune thyroid disease.

5. Vitamin B12 analogs in soy are not absorbed and actually increase the body’s requirement for B12.

8. Processing of soy protein results in the formation of toxic lysinoalanine and highly carcinogenic nitrosamines.

9. Free glutamic acid or MSG, a potent neurotoxin, is formed during soy food processing and additional amounts are added to many soy foods.

10. Soy foods contain high levels of aluminium which is toxic to the nervous system and the kidneys

11. The various negative effects of soy weaken the immune system.

Phytic acid is a part of the soy bean’s makeup which is found in the husk of the bean – and also totally destroys the credibility of the manufacturers’ claims that soy products are a good source of calcium and help prevent osteoporosis. Because soy contains more phytic acid than any other grain or pulse, and because phytic acid impairs absorption of most minerals, especially calcium, soy actually strips your body of calcium.


Although not a household word, phytic acid has been extensively studied; there are literally hundreds of articles on the effects of phytic acid in the current scientific literature. Scientists are in general agreement that grain - and legume-based diets high in phytates contribute to widespread mineral deficiencies in third world countries.


The soybean has one of the highest phytate levels of any grain or legume that has been studied, and the phytates in soy are highly resistant to normal phytate-reducing techniques such as long, slow cooking. Only a long period of fermentation will significantly reduce the phytate content of soybeans.

Most soy-beans are grown on farms that use toxic pesticides and herbicides, and many are from genetically engineered plants. When you consider that two-thirds of all manufactured food products contain some form of soy, it becomes clear just how many Americans are consuming GM products, whose long-term effects are completely unknown

You are going to come across many sources of advice and information about soy, which will extol the wonderful virtues of this protein substitute. This advice will, without exception come from the PR machine of the soy growers. Research this subject further for yourself.