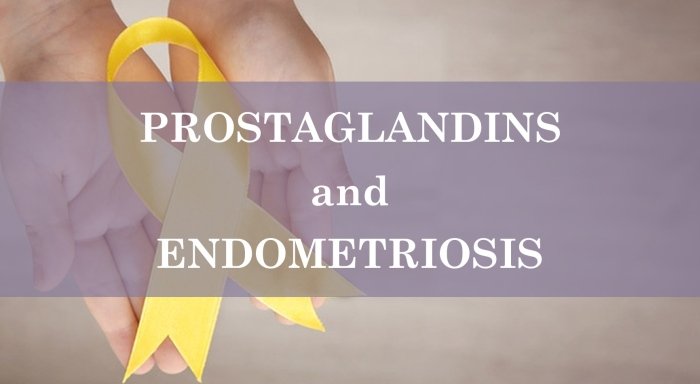 This article helps to explain why and how you experience pain with endometriosis?

Our bodies experience pain through messenger hormones travelling through the body and they end up passing these messages to the brain. Our brains then register this message as a ‘pain’ response and we then feel that pain. This pain response alerts the body to a threat – like a cut, being injured, suffering inflammation within the body etc.

This is a long read but will help you understand why you are feeling pain with endometriosis and how to make adjustments in your diet to reduce your pain symptoms and the inflammation caused by endometriosis.

Prostaglandins were first discovered and isolated from human semen in the 1930s by Ulf von Euler of Sweden. Thinking they had come from the prostate gland, he named them prostaglandins.

It has since been determined that they exist and are synthesised in virtually every cell of the body. Prostaglandins are like hormones in that they act as chemical messengers, but they do not move to other places in the body. They work right within the cells where they are made.

Functions of Prostaglandins - some basics

They have a variety of physiological effects on the body including:

- Activation of the inflammatory responses at the sites of damaged tissue, and production of pain and fever. When tissues are damaged, white blood cells flood the site to try to minimise tissue destruction. Prostaglandins are produced as a result.

- Blood clots form when a blood vessel is damaged. A type of prostaglandin called thromboxane stimulates constriction and clotting of platelets. Also the opposite happens and prostaglandin 12 (PG12) is produced on the walls of blood vessels where clots should not be forming. ( The body is very, very clever. It knows what to do, where to do it and when.)

- Certain prostaglandins are involved with the introduction of labour and other reproductive processes, and the role of fertility. PGE2 causes uterine contractions and has been used to induce labour.

- They are involved in several other organs and systems such as the gastrointestinal tract, cell growth and the immune system response.

Prostaglandins - any of a group of about a dozen compounds synthesised from fatty acids in mammals as well as in lower animals. Prostaglandins are highly potent substances that are not stored but are produced as needed by cell membranes in virtually every body tissue. Different prostaglandins have been found to raise or lower blood pressure and regulate smooth muscle activity and glandular secretions.

One such substance, which stimulates contraction of the uterus, is used clinically to induce labour; another has been in experimental use as a birth control agent. Prostaglandins also control the substances involved in the transmission of nerve impulses, participate in the body’s defences against infection, and regulate the rate of metabolism in various tissues.

Several prostaglandins have been shown to induce fever, possibly by participating in the temperature-regulating mechanisms in the hypothalamus; they also play a part in inflammation. Many naturally occurring prostaglandins as well as many artificial forms have been synthesised in the laboratory

Prostaglandins vary somewhat from one another based upon subtle differences in their chemical structures. These small variations are believed to be responsible for the immense diversity of effects they have on the body.

In general, prostaglandins act in a manner similar to that of hormones, by stimulating target cells into action. However, they differ from hormones in that they act locally, near their site of synthesis, and they are metabolised very rapidly. Interestingly, the same prostaglandins act differently in different tissue. (The in-built intelligence of the human body, that we will never understand)!

Early studies of prostaglandins carried out by researchers revealed that these substances were active, and capable of producing many actions in the body including lowering blood pressure and instigating the contraction of uterine tissue. Later research revealed much more, including the fact that they can be found in almost all body tissue since they are not restricted to specific organs.

Prostaglandins, it was also discovered, are only active for a short period of time before they are modified into a non-functional form and are subsequently excreted from the body. So tissue cannot store prostaglandins, but must instead synthesise them in a nearby area when needed.

Approximately a dozen different prostaglandins have been identified to date, each of which is associated with different kinds of activities and effects on various kinds of tissue. One important activity of a group of prostaglandins is facilitating the relaxation of the muscle walls and the delineate blood vessels, effectively dilating them.

Working in conjunction with thromboxanes, prostaglandins play an equally important role in blood clotting, and the balance between the two kinds of substances essentially control whether or not coagulation occurs. Also, many prostaglandins induce inflammation and the constriction of muscle tissue, while certain prostaglandins are believed to be involved in the inhibition or promotion of activities such as ion transport, cell growth, temperature regulation, and immune system response.

There are 2 groups of prostaglandins which are most relevant to endometriosis - Good or Bad.

Bad - take part in the functions of the body which contribute to endometriosis symptoms and its negative effects i.e. pain, inflammation, digestive disturbance, connective tissue damage.

These potent chemicals act at an atomic level and are not always present in the body. They are produced in reaction to a sudden change or shock or injury in the body.

Our bodies will produce them to act as warning signals, or to provide support to damaged tissue. The dual roles of prostaglandin Series 1 and 2 seem to be contradictory, but we obviously need both types of prostaglandins for the repair, maintenance and survival of the body.

If we did not suffer pain then we would not be alerted to the problem of damage within the body. Suffering pain is distressing, but in turn it is also telling us that something is wrong.

It is fortunate that we now know how these particular prostaglandins work (be it in simple terms), so that women with endometriosis are able to alter the balance of prostaglandin production to reduce their symptoms by reducing the Series 2 prostaglandins, and aim to increase the Series 1 prostaglandins through their diet and with supplements.