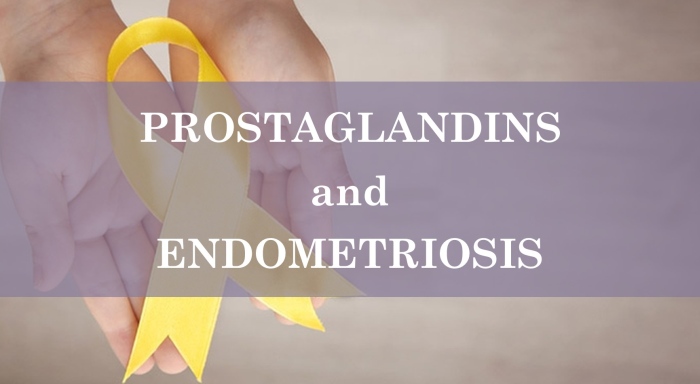 How do prostaglandins relate to endometriosis, pain and inflammation? And how does this relate to your diet? This article should help answer those questions

Prostaglandins serve a variety of regulatory functions within the body. One of these functions is to assist the transmission of pain signals to the brain so that you are readily alerted that damage or dysfunction has occurred within the body.

Prostaglandins are known as local hormones - they are released from cells and bring about changes in neighbouring cells that carry specific prostaglandin receptors in their membranes.

The influence which prostaglandins have depends upon the type of tissue they are acting upon. Such action may be direct, or as a result of modifying the actions of other signalling molecules.

As well as signalling and influencing pain messengers to the brain, prostaglandins will interact with other chemicals in the body when there is damage. They will also intensify the effects of other chemical mediators such as histamine.

Acting in concert these substances can bring about vasodilatation and an increase in the permeability of capillaries supplying the damaged area, encouraging the migration of phagocytes (Phagocytes are leukocytes - white blood cells - that engulf invading micro-organisms, and then kill them.

They are part of our natural defence against infection ) from the blood through capillary walls into the damaged tissue. As a result of these changes, the blood supply to the area increases, the tissues swell, causing inflammation and pain subsequently occurs.

Macrophages are versatile cells; they act as scavengers, they secrete a wide variety of powerful chemicals, and they play an essential role in activating T cells (part of your immune system).

Neutrophils are not only phagocytes but also granulocytes: they contain granules filled with potent chemicals. These chemicals, in addition to destroying micro-organisms, play a key role in acute inflammatory reactions.

There are two main types of phagocytes: neutrophills and macrophages.

Primary dysmenorrhoea (painful periods) is caused by cramping in the uterine muscles — the uterus is a muscle and like all muscles it contracts and relaxes! Women don’t usually feel these muscles contract, unless it is a particularly strong contraction.

With endometriosis the pain associated with menstrual cramps is usually very intense and painful. During a contraction, blood supply to the uterus can be temporarily cut off. This deprives the muscle of oxygen, which causes pain. But why do the uterine muscles contract?

However, not all prostaglandins have this effect on the involuntary uterine muscles, which is why diet can play a big role in minimising the production of series two prostaglandins. The types of fatty acids included in your diet influence the types of prostaglandins made.

For example, series two prostaglandin (the type that trigger powerful contractions of the uterus) levels are increased when animal fat is included in the diet. In contrast, series one and series three prostaglandins (the type that don’t cause uterine contractions) are produced when the diet is higher in linoleic acid, which is found naturally in tuna and salmon oil.

Evening primrose oil and starflower oil are also rich sources of linoleic acid, which is why they are often recommended for women suffering from period cramps and are especially helpful for women with endometriosis.

One major group of hormones secreted by the normal endometrium is that of prostaglandins. They are required for many bodily processes, including several stages of the menstrual cycle and pregnancy.

Prostaglandins are required for ovulation, regression of the corpus luteum (i.e., ending the monthly menstrual cycle), sperm motility, immune interaction, contraction of the uterus at birth and menstrual cramps. Endometrial implants and the endometrium of the uterus are the richest source of prostaglandin production in the body.

However the problem with endometrial implants includes:


For instance, there is a normal surge in prostaglandin F production at the end of the menstrual cycle, causing the effect of the corpus luteum of the ovary to die down and signalling the start of a new menstrual cycle. The implants of endometriosis produce their own prostaglandin surge several days after that of the womb lining. This may be one of the main causes of very early miscarriage.

If a women is a few days pregnant then the endometriosis implants producing prostaglandin F would incorrectly signal the ovary to start a new menstrual cycle, causing the womb lining with the implanted egg to be expelled - and the consequence is an early miscarriage.

Several enzymes take part in the process that transforms fats into prostaglandins. These enzymes act as gatekeepers, channelling fats into the making of different prostaglandins. Like other enzymes in the body, they require specific nutrient co-enzymes to do their job.

The enzyme delta-6-desaturase acts on linoleic acid - from most vegetable, nut and seed oils - to transform it to gamma-linoleic acid (GLA). GLA is used to make the anti-inflammatory series 1 prostaglandins and also supports healthy nervous system function.

The activity of delta-6-desaturase is affected by dietary factors. Trans-fatty acids from hydrogenated oils, too much saturated fat (found in meats, fried foods, junk foods and dairy products) in the diet, high stress, too much sugar or refined flours in the diet all slow down this enzyme down.

Many processed foods contain trans-fatty acids. These fats slow down the activity of delta-6-desaturase. They are manufactured from vegetable oils in a process called hydrogenation, which involves the bombardment of liquid oils with hydrogen atoms to make them solid and prevent them going rancid.

These trans-fats have harmful effects on the stability of cell membranes and the structure of nerve and brain cells. They also interfere with the formation of anti-inflammatory prostaglandins.

The B vitamins are crucial for the conversion of linoleic acid to GLA, which is necessary to produce beneficial prostaglandins. Linoleic acid is an essential fatty acid (EFA), and it is found in foods such as fresh nuts and seeds, safflower oil, and Evening Primrose Oil.

The B vitamins are required to convert this essential oil into a form that can be used by the body to produce the good prostaglandins.

The enzyme bromelain from the stem of the pineapple, is also effective in inhibiting the inflammatory prostaglandins. In an extensive five-year study of more than 200 people experiencing inflammation as a result of surgery, traumatic injuries and wounds,

75 percent of the study participants had good to excellent improvement with bromelain; a much higher rate than that afforded by drugs. Most of the people in this study were discharged from the hospital in only eight days—half the usual amount of time. They also experienced no side effects.

Along with hormones, prostaglandins are very powerful and complex substances and can be easily influenced by outside factors through diet. It could be that our emotions as well as stress could alter and influence the way these natural bodily chemicals work. Many of us have felt and witnessed the changes in our hormones brought about by stress and emotions.

‘You are what you eat’ - we have all heard that phrase. Our bodies react to what we eat. It sometimes seems incredible that the body can differentiate between the chemical and molecular structure of 2 different oils (its only food!) - but our bodies are very clever and NOTHING goes unnoticed. It may not show up immediately, but if you feed your body with things it does not like or need, eventually you will get signals.

Fortunately, due to huge advances in understanding the body and how it works, we now have a better awareness how correct diet is crucial to the health of the body. And women with endometriosis can take advantage of the discoveries and knowledge about the role of diet in controlling their symptoms and shifting the levels of prostaglandins from the bad ones to the good ones.

As it is mentioned above - we do need prostaglandins - both types - they are all part of the complex and intricate orchestra of the body. But it does seem apparent from research that women with endometriosis are producing too many of the negative prostaglandins, which is the cause of many symptoms.