Probiotics are beneficial bacteria that are found in certain foods and supplements.  Healthy gut bacteria can become upset by taking anti-biotics or taking drug treatments or pain-killers on a regular basis.  Therefore, it can be good for your gut and your general health to supplement with probiotics to re-balance your system.

Probiotics have many health benefits both for physical health and mental health.   If you take a regular course of probiotics, they can help restore the natural balance of your gut bacteria.

Gut health has been connected to mental well-being.   Studies have found supplementing with Bifidobacterium and Lactobacillus strains for 1–2 months can improve anxiety, depression and memory.

Interestingly, probiotics may help improve the immune system.  Some probiotics have been shown to promote the production of natural antibodies in the body. 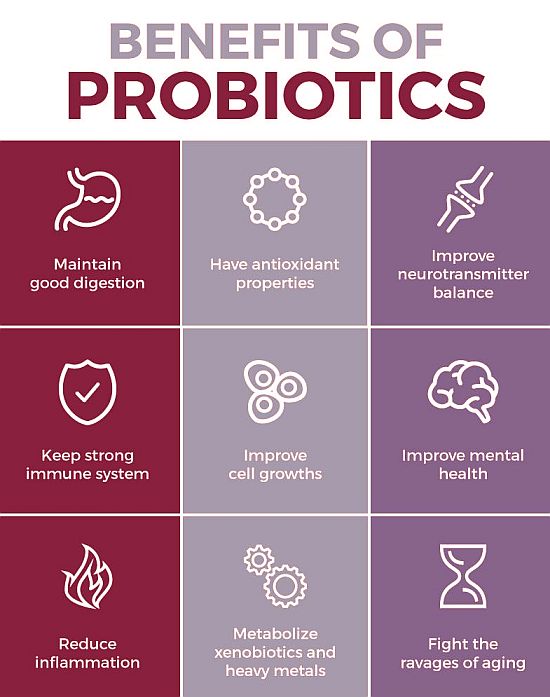 Research on monkeys with endometriosis has shown that when compared to the healthy control group, they showed a significant lack of the probiotic lactobacillus, a ‘good’ bacteria, and significantly more ‘bad’ bacteria such as  salmonella and e.coli.

Monkeys with endometriosis also showed a significant increase of intestinal inflammation than compared to their healthy counterparts in the control group. Although research is not yet conclusive, there seems to be a link between gut health and the occurrence or severity of the disease. 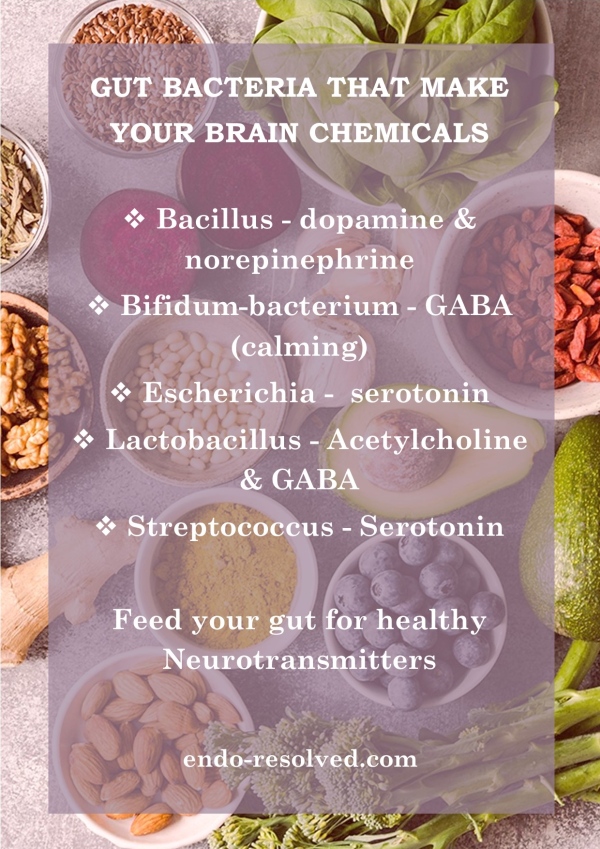 The following strains of healthy gut bacteria help to make certain neurotransmitters in the gut, which are then utilised by the brain and affect mood, sleep and the central nervous system

Dopamine plays a role in pain processing in multiple levels of the central nervous system and is also well know as the neurotransmitter that helps control the brains reward and pleasure centre.  Low dopamine levels are associated with stiff and achy muscles, tremors and impaired fine motor skills like seen in Parkinsons

The general function of norepinephrine is to mobilize the brain and body for action. Norepinephrine release is lowest during sleep, rises during wakefulness, and reaches much higher levels during situations of stress or danger, in the so-called fight-or-flight response.

Serotonin (also known as 5-hydroxytryptamine or 5-HT) is a naturally occurring substance that functions as a neurotransmitter to carry signals between nerve cells throughout your body. Serotonin is found mainly in the digestive tract, and is made from tryptophan which is obtain through diet in foods such as nuts and cheese.  Serotonin regulates depression, anxiety and helps to heal wounds.  Interestingly, serotonin is often responsible for causing nausea.  Serotonin is also responsible for regulating the sleep cycle.

GABA is a major calming neurotransmitter and plays an important role in behavior, cognition, and the body's response to stress. Research suggests that GABA helps to control fear and anxiety when neurons become overexcited. Lower-than-normal levels of GABA in the brain have been linked to depression, anxiety, and sleep disorders.

There are many different probiotic supplements available.   Interestingly, acidophilus and bifidus are beneficial to help expel estrogen by changing the molecules into a form that can be excreted from the body. They also decrease estrogen recycling in the intestines by limiting the growth of unhealthy bacteria.

The bacteria of Lactobacilli seems to play a key role in restoring a healthy gut balance.  One small study found the probiotic strain Lactobacillus gasseri to significantly reduce the total weight and surface area of endometrial implants in female mice.

The exact reason for this is unknown. Researchers believe that L. gasseri may increase levels of a cytokine called interleukin-12, which has been shown to reduce growth of endometrial tissue.

Human studies are needed to know the best probiotic strains and doses for endometriosis.  In the meantime, supplementing with a probiotic complex with various strains will help to improve your gut health and support your immune system.