General bowel symptoms are extremely common in patients with endometriosis as it appears that endometriosis can upset the digestive system. The treatment of the disease can include hormone drugs which will upset the balance of the gut.

Also, the bowel prep medication given to women in preparation for a laparoscopy can strip the intestines of healthy gut flora and this then leads to digestive health problems and can sometime cause IBS.

The exact percentage of endometriosis patients affected with bowel symptoms is difficult to estimate but the percentage may be as high as 60% or more. It usually occurs in women with moderate to severe endometriosis. 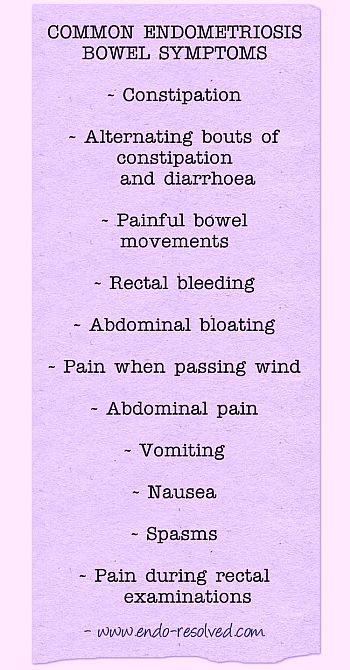 If endometriosis invades the bowel wall deeply, it causes a lot of scarring and can develop into a growth that partially obstructs the bowel wall. When the disease is mild, it usually causes no symptoms at all.

Surgeons have found that the location of GI endometriosis follows well-defined patterns. The lower recto-sigmoid colon is most commonly involved, followed by the last part of the ileum (the small intestine), the cecum (the first part of the large bowel), and the appendix (which hangs off of the cecum.

When endometriosis develops on the rectum, it frequently scars and makes it move forward so that it touches the back of the uterus, and this causes what is known as ‘obliteration of the cul de sac’.

Surgeons reckon this indicates the presence of ‘deeply invasive disease in the utero-sacral ligaments, the cul de sac, and usually the front wall of the rectum itself with what is called a rectal nodule'.

A rectal nodule which affects the cul de sac can cause painful bowel movements. This pain can be for the entire month, plus rectal pain during intercourse or while sitting. This type of GI involvement can also cause constipation, intestinal bloating and cramps.

Many women experience pain and cramping in the right lower quadrant of the abdomen and this can be caused by endometriosis that involves the ileum. Some women with GI endometriosis do not have rectal bleeding, although when rectal bleeding and painful symptoms occur during the menstrual flow, this raises suspicion for GI involvement.

It appears that GI x-rays and colonoscopy are not very useful in diagnosing GI endometriosis because the disease usually doesn’t penetrate all the way through the bowel, but remains in the muscular wall of the bowel.

GI endometriosis requires surgery to be properly diagnosed. A laparoscopy is adequate for diagnosing GI disease provided that the surgeon takes time to look at the areas which can be affected. Most gynaecologists do not look at the intestines very closely so many laparoscopies are useless for ruling out GI disease.

Surgery appears to be the only way to eradicate GI endometriosis. Unfortunately many women who have had GI disease diagnosed are advised to have a hysterectomy and removal of the ovaries even though these organs may be un-involved by disease.

It is not helpful to consider removal of the uterus, tubes and ovaries to treat pelvic or GI endometriosis since removing those organs doesn’t eradicate the disease.

Many surgeons use laser vaporisation or electro-coagulation to treat pelvic endometriosis, but it is unsafe to use this type of treatment when the bowel is involved. This is because a hole could be created which may not obvious and can cause serious complications.

Experienced surgeons realise that excision of the endometriosis with suture or staple repair of the bowel wall is the safest way to remove GI endometriosis.